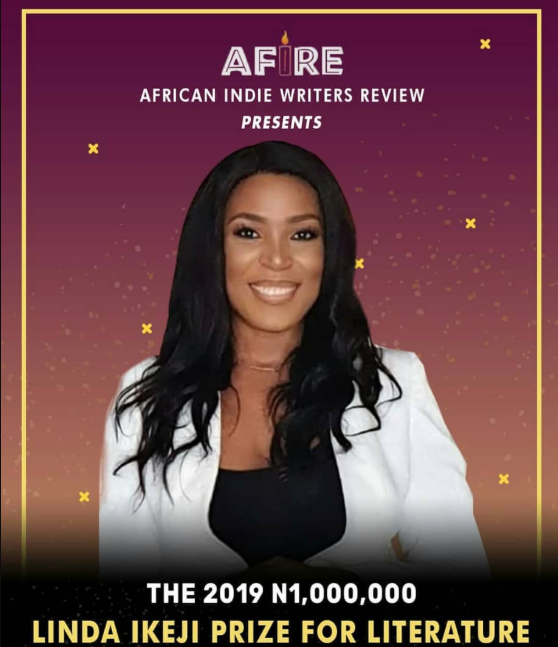 We are almost there!

The short list for the African Indie Writers Review AFIRE 2019 Linda Ikeji Prize for Literature is out. There are five writers on the short list. The new and popular prize for upcoming and emerging writers of African descent received hundreds of entries from which these five on the short list were carefully and methodologically picked.

We must note again that the AFIRE Linda Ikeji Prize for Literature is open to writers of any African nationality, writing, for now, in the English language from anywhere in the world.

In no particular order, we present the selected writers on the short list.

Review: The Gathering of the Tribes is a riveting metaphorical narrative set in a fictional rural community. However, on closer examination this community is an inescapable metaphor for a stumbling nation standing, as the adage goes, in midstream with soap in her eyes. The beautiful flow of tone and imagery underscores the socio-political unrest confronting citizens within any sold and under-developed national reality, especially in Ufelli’s home country, Nigeria. The characters are drawn into extreme corners of privilege and non-privilege – and the only thing standing in between the two sides is both the key to the unravelling of the conflict engendered by extreme capitalist greed and the catharsis of survival for the community itself. In this pulsating work of fiction Ufelli, a legal practitioner writing from Nigeria, brings a luminary legal streak to bear on the sharpness of the issues tackled head on by A Gathering of the Tribes.

Review: Rising from a background of both the grim and brutal reality of the Trans-Atlantic slave trade and the exploitative partition of Africa at the Berlin Conference in 1884, Ndukwe Jnr’s critical analysis of the contemporary African creative force shouts – and very loudly too – that it is time. Time for what, one may ask? The essays, all organically related at that deeper level of discourse with which African civilizations baffled gawking early colonialists, say simply that the African genius is valid genius, period. There is evidence for this in the rush of creative flood from the continent that has watered global conversations across all genres and cadres of art. The rhetoric captures the warmth of African family in a discourse context, ‘rooted in historical relevance’ that ‘directly connects to the issues that have plagued and continue to plague Africans within Motherland Africa and in the diaspora.’ A graduate student of Political Science concentrating on International Relations and Diplomacy at California State University, Los Angeles, Ndukwe Jnr is also a columnist for The Guardian in Nigeria.

Review: Amokeye: The Dilemma of a Priest strongly captures the spirit of the kind of raw talent and creative explosion that inspired the AFIRE journey. In this seminal presentation of stage exuberance Igajah’s characters flow in a steady ebb of crises that is so fundamental to human survival, yet so common in its manifestations of folly in everyone’s personal experience. Passion and religion: the very bane of modern civilization, is enmeshed and connected, like strands of DNA, in a flux that overwhelms a couple in natural love. Amokeye gives everything for love, including abortions that eventually destroys her womb, only for her lover to break his vow to her, in fulfillment of an earlier vow to religious faith. Cutting the bonds of love as easily as he did she pursues him, right to his new sanctuary: the confessional booth. He is now a priest that must hear the plea for forgiveness for the death of everyone dear to him; from a very, very familiar voice. As events bounce and ricochet to a bloody climax we see underlying the chaos the true toll of betrayal and revenge – and what happens when forgiveness is dissected from human encounters. Igajah is a graduate of English and Literary Studies from the University of Calabar. He lives and writes in Cross River State, Nigeria.

Review: The story begins at the end. With brain drain in reverse, or rather, with a spiritual back view mirror A Dream in the Jungle blazes a new opening in the fabric of contemporary African socio-political reality. After a long period of sojourn on the ‘away’ circuit Domkat is heading home, on a bus with a fellow passenger he nicknames ‘Blackie’, not very far, as nomenclature goes, from the derogatory ‘darkie’ of the colonial regents. However, this is a story completely void of the misfit of colonial arrogance. As the squalid bus rattles Blackie and Domkat back home from the city Domkat transforms to that total figure of sober reflection that every rational African must become at one point or the other, if they are conscious to the total rot of the governments and political isms running the continent. It is a dark turbulent transformation, but urgently needed for a society that had drifted off to sleep in resistance, just as Blackie drifted off to indifferent sleep right in the middle of Domkat’s very passionate and animated presentations. It must be kept in mind, however, that they are moving towards the beginning, and who knows if there is a beginning apart from the beginning. One cannot judge the outcome of this story just from the end. Hope may be lurking somewhere in that dim horizon. Edet is a Civil Engineer that writes from Lagos, Nigeria.

Review: Forming snapshots that quickly recede to form a looming larger picture the stories of A Cluster of Petals drive motion with the rush of fast flood and creates resonance with an even louder cadence. There is something somewhere one has seen before, some connection that must occur as necessity in a universe peopled with so many sharing so little a range in both human hope and societal despair. A Cluster of Petals is a collection of short stories that were written individually over the past fourteen years. It is an eclectic mix of experience, cut from diverse subjects of various pedigree that have been loosely but organically arranged in the order in which they were written, thus capturing in a novel fashion, the literary growth of the author. As growth is also the strongest word that should be active on every tongue on the continent it is by no means a coincidence to rise from the drama of a secondary school boarding school in one part to a mental effigy of Nelson Mandela in another part, in response to global concerns of the misbegotten popularity of xenophobic mania. The cluster is vibrant with throbbing energy permeating issues that hurt for the hurt to stop. Adebola is a medical doctor from Kogi State, Nigeria. He also has an M.Sc. in Translational Neuropathology from Sheffield Institute of Translational Neuroscience, University of Sheffield.

Congratulations to the short-listed writers.

The winner of the premiere edition of the AFIRE Linda Ikeji Prize for Literature will be announced on December 1 2019.

The winner of the 2019 AFIRE Linda Ikeji Prize for Literature will take home the sum of N1,000,000 cash. The exposure value may not be so easily calculable, fulfilling the vision of AFIRE to empower and embolden new and emerging writers from Africa.

From the AFIRE team: Keep writing!